Objects of Wonder: Drift at the Shed

The complex installations in “Fragile Future” induce a feeling of mystery and awe that is rare in today's art. 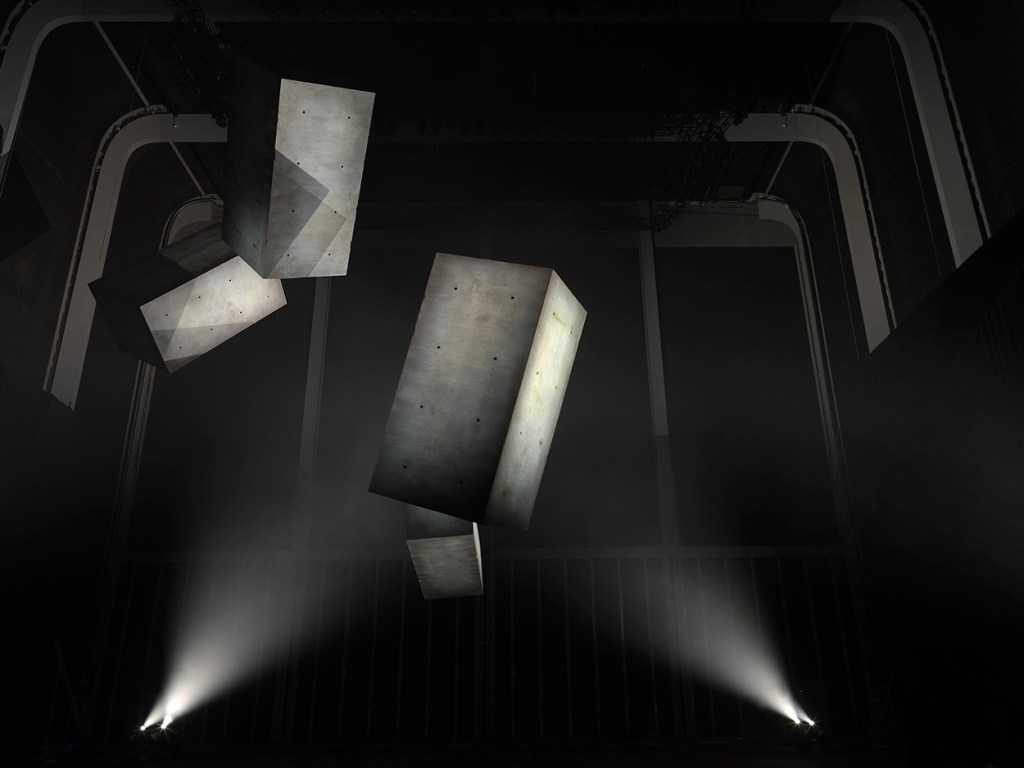 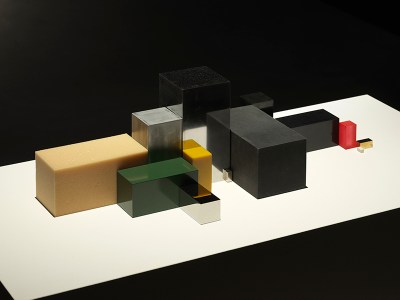 For the most part, “Fragile Future,” Drift’s exhibition at the Shed, follows the conventions of the contemporary art exhibition. But the overall experience of it is unusual, thanks to moments when the conventions are rejected in strange, subtle ways. Take the wall labels. Some of them name the materials used to make the work, as you’d expect. This naming is the conceit of the sculpture series “Materialisms” (2018–21). The label for Starbucks Cup (2021) lists paper, coffee, water, polystyrene, wood, and glue; the components of Bike (2019) include aluminum, steel, rubber, and foam. In the sculptures, those substances are shaped into rectangular prisms, sized in proportion to their use in the named item. You can identify each material by color and texture, and match it to the word on the label. Viewing “Materialisms” is a satisfying exercise that teaches you something about the stuff of everyday life. But there’s nothing on the label but a title for Drifters (2017 –21), the exhibition’s showstopping finale, which withholds information and induces awe. An ensemble of massive blocks float overhead in the Shed’s four-story–high McCourt Space, languidly dancing to Anohni’s brooding, billowing score. Though some trompe l’oeil painting makes the blocks look like weathered concrete, you might assume they are made of a much lighter material. If you know about Anicka Yi’s In Love with the World, currently on view at Tate Modern, where microbe-sculptures fly around the Turbine Hall, their transparent plastic membranes revealing the drones powering them inside, you might guess that Drift has used a similar technology for their flying art. While “Materialisms” encourages analytical thinking, Drifters abjures it. Don’t try to figure out how it’s made. Just surrender to the mystery.

Drift was founded in 2007 by Dutch artists Lonneke Gordijn and Ralpha Nauta, who lead a team of sixty-four engineers and designers in building the complex apparatuses of their art. When it comes to their most spectacular installations, Gordijn and Nauta are magicians who won’t reveal their tricks. There are plenty of artists who trade in obscurity, challenging the audience to puzzle over references and tease stories out of the work. But Drift’s obscurity is of a different order. The experience of the work is immediate and embodied. The backstory doesn’t matter. They’re concerned with the miraculous, with the audience’s sense of wonder, moderated at times with a scientific curiosity.

“Fragile Future” is an artfully choreographed odyssey through reason and magic. The show begins with the eponymous installation, versions of which Drift has been making since the studio’s founding. LED bulbs with real dandelion seeds glued to them rest in concatenated boxes of copper alloy, which conduct the electricity that illuminates them. It looks fragile indeed, with seeds that look they might blow away delicately cradled in spindly formations. The installation suggests a synthesis of technology and nature aimed at preservation. Coded Coincidence (2021), in the following gallery, sets small lights whirling in swarms, attached to transparent wings that rustle as they brush against the black platform. Their inverted eddies reminded me of fire, though the label says the work is meant to evoke elm seeds borne on spring winds. Either way it’s a primal vision, an approximation of a natural phenomenon somehow both tempered and intensified by the knowledge of its technical underpinnings. This is followed by Ego (2020–21), a cube woven from slender nylon filaments that shimmer under a spotlight, heaving and falling like a mourner’s chest as the soundtrack emits sighs and groans. 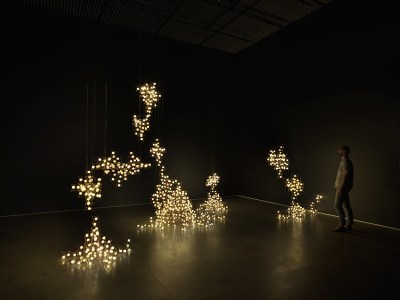 After the dramatic lighting and motion in the black-box galleries preceding it, the stillness and brightness of “Materialisms” represents a return of reason. But this is brief: monitors and projections in the next gallery show new animations of the Drifter blocks flying through cityscapes and nature. Then, at last, come the Drifters themselves. After the videos, they appear as a fantasy made flesh.

“Fragile Future” is presented in collaboration with Superblue, a new enterprise supporting immersive art experiences that opened its first venue in Miami this past spring, and showed an installation by Drift there. Drift’s work is often categorized among that of other studios who produce immersive experiences, and displaying it requires the resources and know-how that an organization like Superblue can provide. But Drift’s work isn’t immersive, or at least it doesn’t bathe viewers in projections or surround them with stimuli from all sides, as most work presented under the banner of immersion does. An encounter with a work by Drift follows a twentieth-century script: the viewer encounters an object, moves around it, contemplates it. But Drift’s objects often move, too: they float, swarm, and sigh. Images are so ubiquitous these days that an encounter with one is unlikely to trigger an experience of the sublime. Drift aspires to cultivate that sensitivity anew. “Fragile Future” is a rare exhibition that brings on wonder and awe.

Biden to urge G-7 leaders to call out, compete with China

Back in public eye, Trump takes aim at Fauci & China over...

Bolivia's 'People of the Water' try to survive loss of... 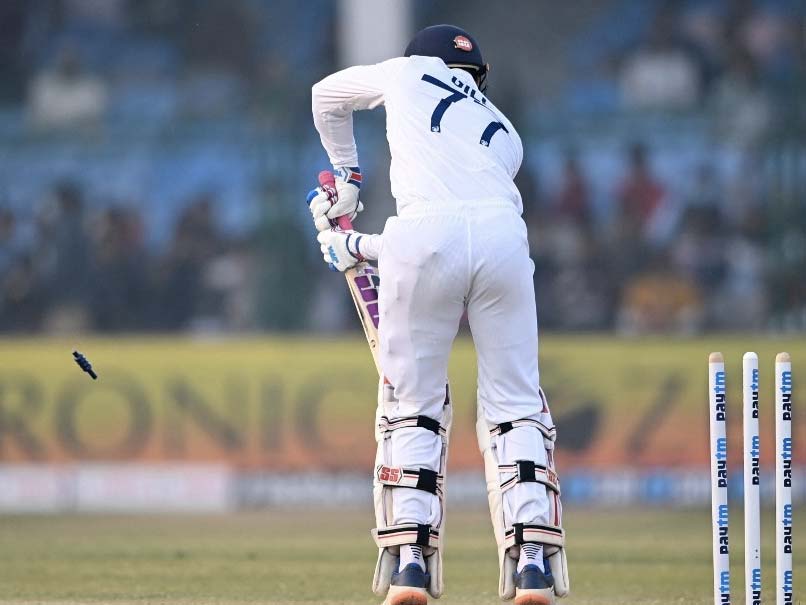 Shubman Gill Will Have To "Work On His Technique": Irfan...

IND vs NZ: Shubman Gill was dismissed for 1 in the second innings of the 1st Test... 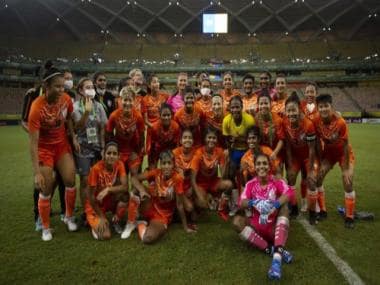 We will carry the good feeling from Brazil to the Chile...

We will carry the good feeling from Brazil to the Chile game, says Thomas Dennerby

PM lauds collective efforts for revival of Noon river in... 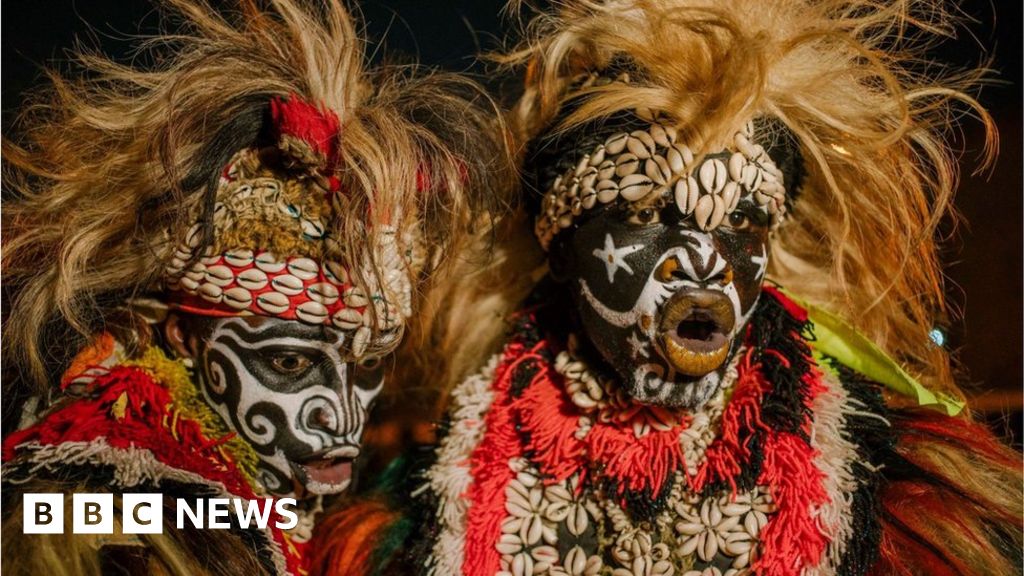 The three-day event is a celebration of Senegalese culture and features an elaborate... 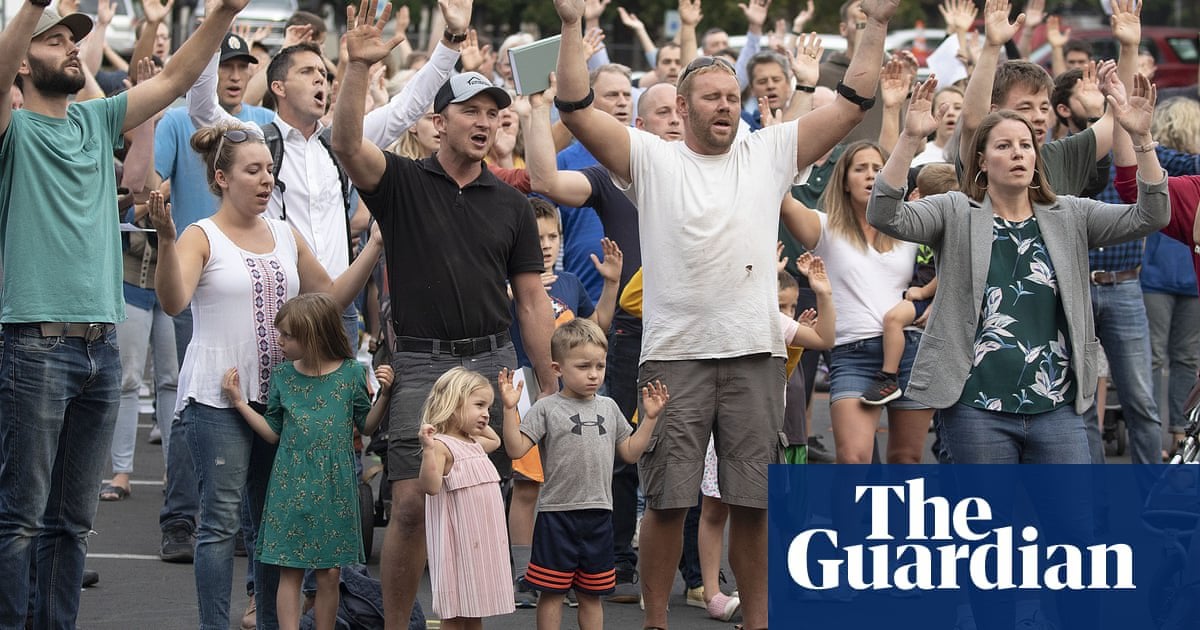 The mysteries trapped in the corners of the universe are far more exciting than... You guys are amazing #SHIBARMY3000 #SHIB Soldiers on this Twitter Account????I cannot... 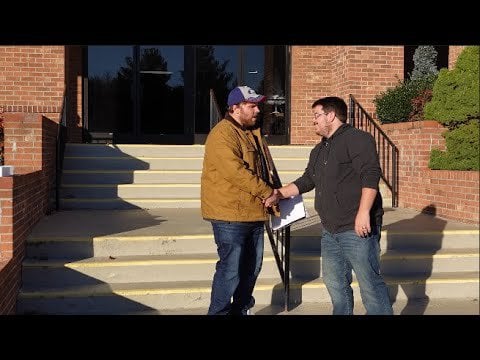 Grab yourself a cheap beer, unzip those jorts, and slick back that sweaty mullet...